Bernie Sanders announced his bid for the 2020 presidential election last week. In just 24 hours, Sanders raised almost $6 million for his campaign. As of Monday, he had raised $10 million, and additionally, one million people have signed on to support the campaign. Although Sanders was a popular candidate in the 2016 election, he faces some controversy with allegations of his campaign’s mistreatment of women and criticisms of how his previous campaign handled sexual harassment complaints. However, Sanders is still a strong contender, polling just 2 percent behind former Vice President Joe Biden (the current frontrunner).

We polled students on Monday, Feb. 25. Overall, they were split on whether Sanders should have thrown his hat into the ring, but by a narrow margin, more students believed it was not a good idea for Sanders to run for president again. 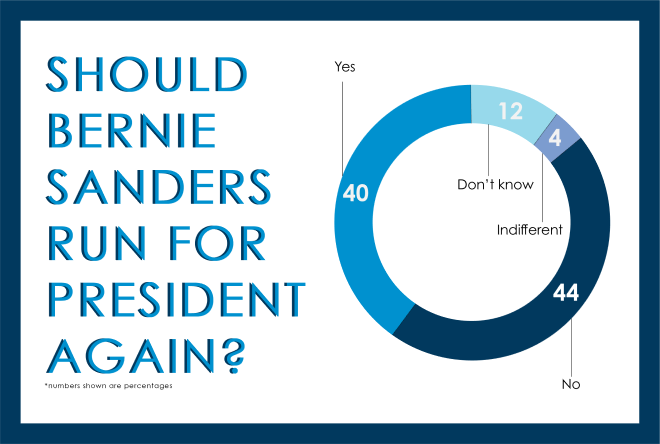 “I feel like right now the Democratic party in general needs a moderate candidate in order to balance out what’s been happening with the country,” McCormick freshman Sarah John said. “I’m not sure if Bernie Sanders can do that for our country right now.”

“I’m excited about the possibility of Sanders building on his momentum for another run,” Zucker said. “At the same time, we saw demonstrable flaws in his policies and his campaign run in 2016. I think it’s sort of baggage that I think could get in the way compared to the newer slate of 2020 candidates who have learned from his campaign and also have their own more progressive policies, but we’ll see what happens.”

Stories by this author